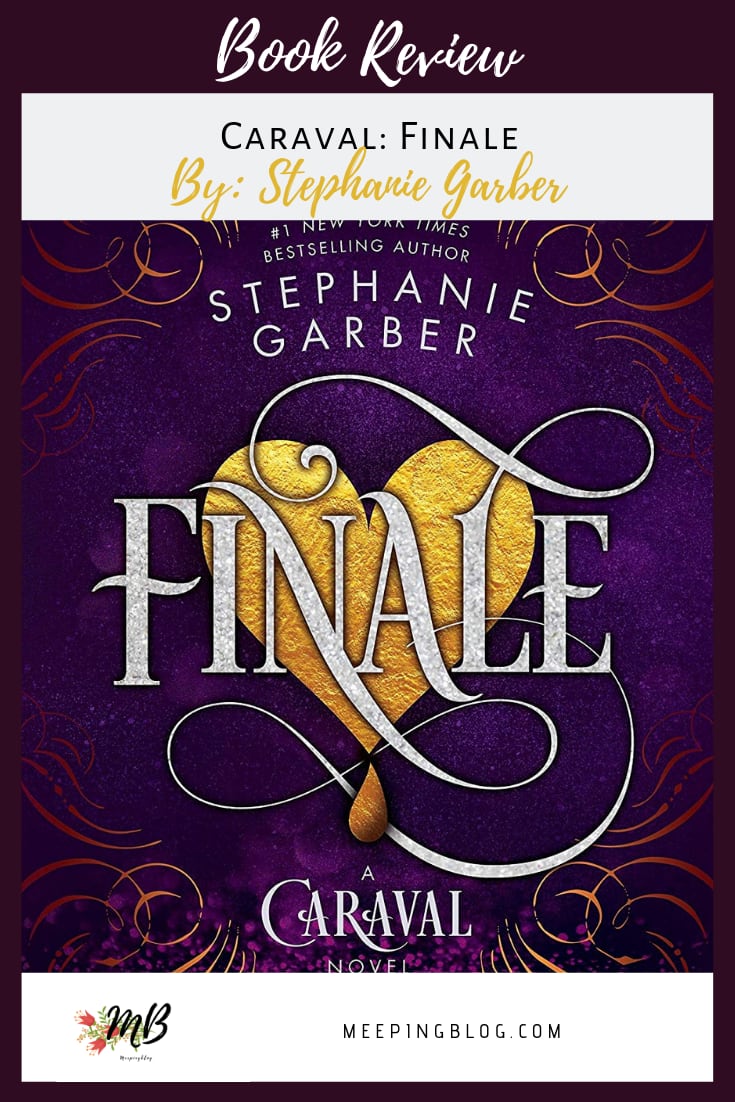 With lives, empires, and hearts hanging in the balance, Tella must decide if she’s going to trust Legend or a former enemy. After uncovering a secret that upends her life, Scarlett will need to do the impossible. And Legend has a choice to make that will forever change and define him.

Caraval is over, but perhaps the greatest game of all has begun. There are no spectators this time: only those who will win, and those who will lose everything.

Welcome, welcome to Finale. All games must come to an end…

It continues in the city of Valenda, after the days of mourning the death of Empress Elantine. The Dragna sisters await the awakening of their mother to signal the awakening of the Fates. While there are no magical games present this time around, there’s plenty of ancient magic to make up for it. It’s all about the Fates, immortals, magical suitors paired with romance and dangerous choices.

These were some of the characters that left a lasting impression.

The Fallen Star: There’s not much that can be said about the Fallen Star without spoils but I can say that the character lived up to their title.

The Prince of Hearts: Jacks was introduced in the second book and he plays an important role in the Finale. The Prince of Hearts is a Fate that curses those that draw his card to unrequited love and the best way to describe Jacks is to call him a ‘beautiful’ tragedy. Despite being able to control the emotions of others and be gifted with a murderous kiss, the Prince of Heart’s weakness is his one true love. This character, in my opinion, had a lot more depth than ‘Legend’ who played his role but didn’t make a powerful impact enough to be mentioned.

Paradise, the Lost: It was interesting to learn about Donatella and Scarlett Dragna’s mother life before she became Paloma.

This book did not held the magic found in the two previous book and it could have certainly gone in a different direction. However, there were things that I genuinely found enjoyable. The Fates, Fated objects and fated places were a very interesting concept.

The Fates themselves were eerie, particularly the greater Fates and I thought mysticism and horror blended well. The Fated objects had a very interesting history, in particular Scarlett’s enchanted dress.

The book itself was divided into chapters between Scarlett and Donatella and it shifts from a normal to a colorful perspective. As mentioned in the previous two books, Scarlett is able to see the world in colors and this is a concept I think the author touches brilliantly upon. Positive emotions are described as “…excited aquamarine.,” while the more negative portions fall under “frustrated gingersnap”.

The ending was not spectacular to me. It felt rushed and cliché and all the magic gathered lost their enchantment as we neared the last bit. All loose ends were tied and new mysteries introduced. Finale was probably my least favorite book of the series despite the fact that I’d been looking forward to it.

I would like to add that I’m not huge on romance and therefore that might have downplayed the ending for me a bit. Other than that, this was still a very enjoyable read.

As always, a huge thank you to NetGalley for supplying me with the kindle version of this book. However, all opinions remain my own.

There was so much desperation and pain evoked in that single quote that it stayed glued to my brain for the duration of the book.

I split ratings into: positive, mixed or negative. In the world of traditional star ratings, it would go like this:

Have you read the Caraval series? Are you planning to snag Finale?

House of Salt and Sorrows | in Book Reviews

Annaleigh lives a sheltered life at Highmoor, a manor by the sea, with her sisters, their father, and stepmother. Once they were twelve, but loneliness fills the grand halls now that four of the girls’ lives have been cut short.

Carry On: The Rise and Fall of Simon Snow by Rainbow Rowell | in book reviews

Begins with Simon Snow, an orphan and magician, returning to his last year at Watford School of Magicks to finish his studies and hopefully finish off the magic-eating monster that has been threatening his safety as well as the existence of a magical world as they know it.

Things in Jars | in Book Reviews

I finished reading Things in Jars by Jess Kidd. These are my thoughts based on my reading.